Mekki Salah first came to Hanoi with the Algerian embassy over 20 years ago and in that time he has worked as restaurant owner and hotel proprietor, but his real passion is bird watching.
By an accident, I bump into an old friend who is heading off to a conference at the Mela hotel in Tam Dao National Park, Vinh Phuc province. Tucked under his arm is the book Birds of Tam Dao, a collection of photographs taken by Mekki Salah, the Algerian owner of Mela hotel in Tam Dao who first came to Vietnam in 1985 as an Algerian diplomat The stunning collection of photos captures 100 species of local and migrating birds in the National Park as well as a wide range of other animals and insects found in Tam Dao.

Salah explains he was always drawn to birds as a boy, when he played with friends in the streets of Algiers. â€œIt was a love passed on by my aunt who lived in a village 350km from the Algerian capital. Flocks of three or four hundreds wild pigeons would settle in front of her house and she would feed them all,â€ says Salah. Now married to a Vietnamese national,Salah is thankful to his adopted country as it helped revive his passion for photography which he had ignored during his spell as a diplomat. Salah first studied photograph in France when he was 17, but in Vietnam perhaps he found his muse.

â€œThe country is very rich in natural landscapes, each region has a unique beauty, and all inspire me,â€ says Salah. Now happily married with one son, Salah seems completely at home in Vietnam. He has travelled from the northern mountainous areas down to the southernmost tip of Vietnam at Ca Mau. In between he has traipsed through landscapes, photographing the people and scenery along the way.

After exhibiting his work in Vietnam and abroad, his first collection Vietnamâ€™s Hidden Pathway appeared in 2005. Salahâ€™s first visit to Tam Dao dates back to 1986 when he was working in Hanoi. Like everyone else, he took advantage of the weekend to discover the countryside surrounding the city. Half a dayâ€™s drive and blessed with a cool microclimate, Salah admits Tam Daoâ€™s climate and proximity to the capital were what drew him back.

In fact he claims he kept returning more out of apathy than out of interest. But â€œLife has many surprises up its sleeve,â€ says Salah. â€œAs the years went by, I found myself living in Tam Dao for professional reasons,â€ he recalls. â€œDuring my leisure time, I went for short walks in the forest and learnt to seek out its â€˜citizensâ€™. The first inhabitant of the green expanse who caught my eye was the short-tailed parrotbill. I was fond of this bird.â€ Each time Mekki went back to the forest, he discovered more species.

â€œObserving birds is not easy and taking photographs of birds is even more difficult and sometimes impossible. Luck plays a large part in it. A picture of the most common species can take months to achieve while the rarest of birds may hop in front of your lens on the very first day,â€ writes Mekki in Birds of Tam Dao. Now Tam Dao has become his refuge and despite his concerns for the uncontrolled exploitation of the forestâ€™s resources, this passionate photographer still remains optimistic.

â€œIt is my dearest wish that the readers should see this book. The birds are only a small part of Tam Daoâ€™s treasures, but they are worthy messengers. This book is for wild bird enthusiasts, both professional and amateur,â€ he says. Jonathan C Eames, the programme manager of Birdlife International in Indochina says, â€œThe chronicle of woes that continues to befall Tam Dao has at least been offset by the publication of this splendid portfolio of Mekkiâ€™s photographs, a truly bright spot in the darker big picture.â€ â€œMekki Salah has helped us popularise the hidden treasures of our forest,â€ says Do Dinh Tien, director of Tam Dao National Park 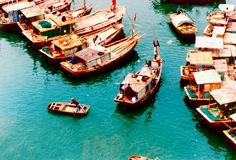