UNESCO-recognised Hoi An ancient city in the central province of Quang Nam welcomes more than 3,000 tourists, mostly from Europe and North America, each day 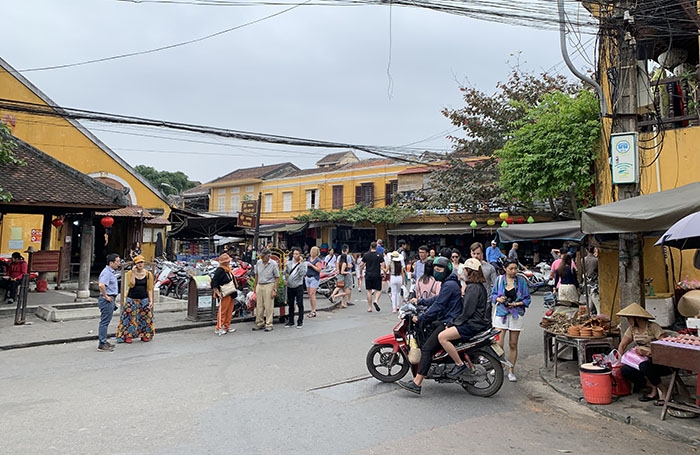 According to the municipal Bureau of Culture and Information, among over 10,000 overnight visitors in Hoi An, 90% are foreigners, and the occupancy rate stands at about 50%.

Inter-sectoral working groups have been set up to inspect the performance of accommodations and restaurants in the work, he added.

During a field trip to Hoi An on February 22, Chairman of the provincial People’s Committee Le Tri Thanh said the city has remained a bright spot in tourism in the region and the country as well.

He called for efforts to ensure Quang Nam and Hoi An in particular is a safe and friendly tourism destination.

Hoi An has been known in the international market with various names like Lam Ap, Faifo, Hoai Pho and Hoi An. The only Southeast Asian port-market in Vietnam and very rare in the world, Hoi An keeps almost intact 1,360 architectural relics like streets, houses, assembly halls, communal houses, pagodas, shrines, clan houses, ancient wells and tombs. They bear both the Vietnamese traditional art characteristics and the convergence of eastern and western cultures.

Through centuries, yet customs and practices, rites, cultural and belief activities as well as traditional foods of Hoi An are still kept and preserved along with generations of ancient street dwellers.

Hoi An also boasts a natural environment which is healthy and peaceful with small suburban villages engaged in crafts like carpentry and pottery.

The cultural and economic exchanges that ran from the 16th to the 19th centuries have left in Hoi An ancient town most of the forms of Vietnam’s ancient architectures, grouping traditional national arts enriched with sketches of foreign arts.

Hoi An is the only case in Vietnam and among the very rare cases in the world. With its values, Hoi An has been recognised by the UNESCO as a world’s cultural legacy and honoured by many famous travel magazines. In July 2019, with 90.39 points, Hoi An was elected by the Travel and Leisure travel magazine as the most attractive city in the world in the year. It is also the first tourist site in Vietnam honoured by the Google Doodle.